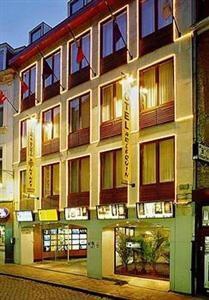 The Floris Arlequin places guests only a few steps from the famed Grand Place. This is one of the conveniently located hotels in Brussels that offers access to many attractions in a short proximity, including the city center, Waterloo Hotel, Brussels Formula One, the Congress Center, and much more. Onsite amenities include banquet and meeting rooms, an amphitheater, and a restaurant. The Floris Arlequin Brussels is situated only a five minute walk from the central train station. The hotel is also located 14 kilometers from the Brussels Airport, which can be reached via hotel airport transport or by one of the city express trains which depart every ten to thirty minutes for the airport. Taxi cabs are also available and public transit is located nearby to escort guests about the city.

Rooms at the Floris Arlequin Grand Place include such amenities as television, telephones, Internet access, climate controls, and bathrooms.

The Floris Arlequin Hotel is located in the heart of the Brussels historic district. There are many shops and restaurants in close proximity, giving guests many choices.